How to Measure the Risks Associated with Mutual Funds?

This blog supplies the ways of measuring the possible risks related to your mutual fund investments. We welcome the suggestions on what you would like to read next.

‘There is no investment with zero percent of risk.’ Yes, it is ‘The Fact’. Then, what are those flashy figures of dividend payouts, yearly returns, and rankings of the mutual funds that the fund websites and advertisements boast of? These tempting numbers are the candy flosses to attract the investors’ eyeballs towards their schemes.

But committing yourself to any mutual fund based on its historical returns and dividends is simply ignoring the risks involved. Investors aspire to have the best mutual fund in their portfolios but the key to pick the winner is to know the risk associated with it. And most importantly, they need to evaluate the risk that goes along with the mutual fund, at a regular interval. But, how can we accomplish that?

There are five predominant indicators that analyze the risks associated with the stocks/bonds/mutual fund portfolios. Modern Portfolio Theory (MPT) is a financial methodology that acknowledges Alpha, Beta, Standard Deviation, R-Squared, and Sharpe Ratio as the five historical predictors of investment risks.

The power of these five indicators will assist the investors to evaluate the risk-reward parameters of any particular mutual fund scheme, by contrasting it with the market benchmark. All you need is to perform a small 5-step test as outlined below-

For the purpose, we are considering a hypothetical example of “PQR-Equity (G)” scheme to measure its riskiness in our “Power of 5” concept:- 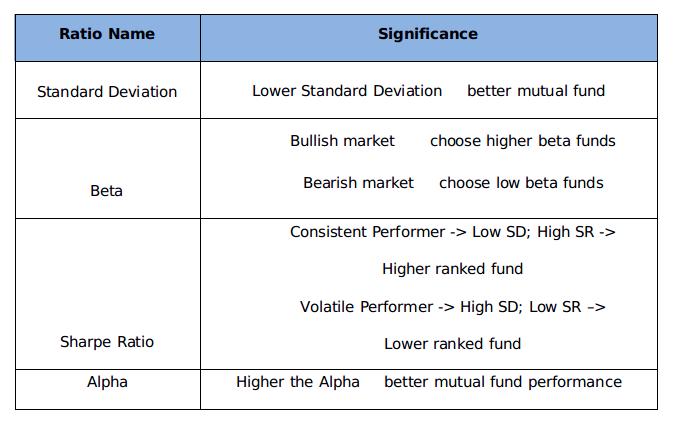 This ‘power of 5’ concept is framed to assist the investors in taking a wise decision on their mutual fund investments. We know that the investment in any type of financial instrument is accompanied by risk in one or the other way. But we suggest avoiding the hasty decisions while investing your money. Investing blindly on the basis of past returns is as similar as expecting good rice yield and overlooking the climatic or other risks and not taking the precautions for the same.

The five risk measures that are being focused on provide some balance to the risk-return equation. The good news is that these indicators are readily calculated and are available on financial websites, as well as being incorporated into research reports. For example, as you visit MySIPonline and choose a mutual fund you wish to evaluate, you will find the current data for all the above parameters (under the Risk Measures tab of a particular fund).